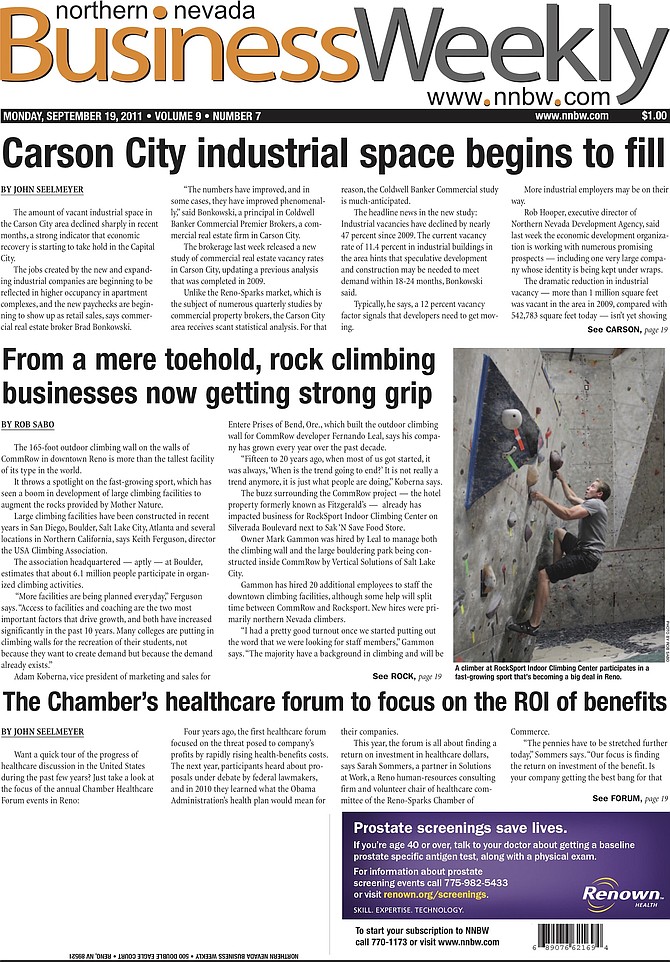 The amount of vacant industrial space in the Carson City area declined sharply in recent months, a strong indicator that economic recovery is starting to take hold in the capital city.

The jobs created by the new and expanding industrial companies are beginning to be reflected in higher occupancy in apartment complexes, and the new paychecks are beginning to show up as retail sales, says commercial real estate broker Brad Bonkowski.

“The numbers have improved, and in some cases, they have improved phenomenally,” said Bonkowski, a principal in Coldwell Banker Commercial Premier Brokers, a commercial real estate firm in Carson City.

Industrial vacancies have declined by nearly 47% since 2009. The current vacancy rate of 11.4% in industrial buildings in the area hints that speculative development and construction may be needed to meet demand within 18-24 months, Bonkowski said.

The 165-foot outdoor climbing wall on the walls of CommRow in Downtown Reno is more than the tallest facility of its type in the world. It throws a spotlight on the fast-growing sport, which has seen a boom in development of large climbing facilities to augment the rocks provided by Mother Nature.

Adam Koberna, vice president of marketing and sales for Entre-Prises of Bend, Ore., which built the outdoor climbing wall for CommRow developer Fernando Leal, says his company has grown every year over the past decade.

— Page 1, by Rob Sabo
The Chamber’s healthcare forum to focus on the ROI of benefits

Want a quick tour of the progress of healthcare discussion in the U.S. the past few years? Just look at the focus of the annual Chamber Healthcare Forum events in Reno.

Four years ago, the first forum focused on threats posed to company profits by rapidly rising health-benefits costs. The next year, participants heard about proposals under debate by federal lawmakers, and in 2010 the focus was on Obamacare.

This year, the forum is all about finding a return on investment in healthcare dollars, says Sarah Sommers, a partner in Solutions at Work, a Reno human-resources consulting firm and volunteer chair of healthcare committee of the Reno-Sparks Chamber of Commerce.