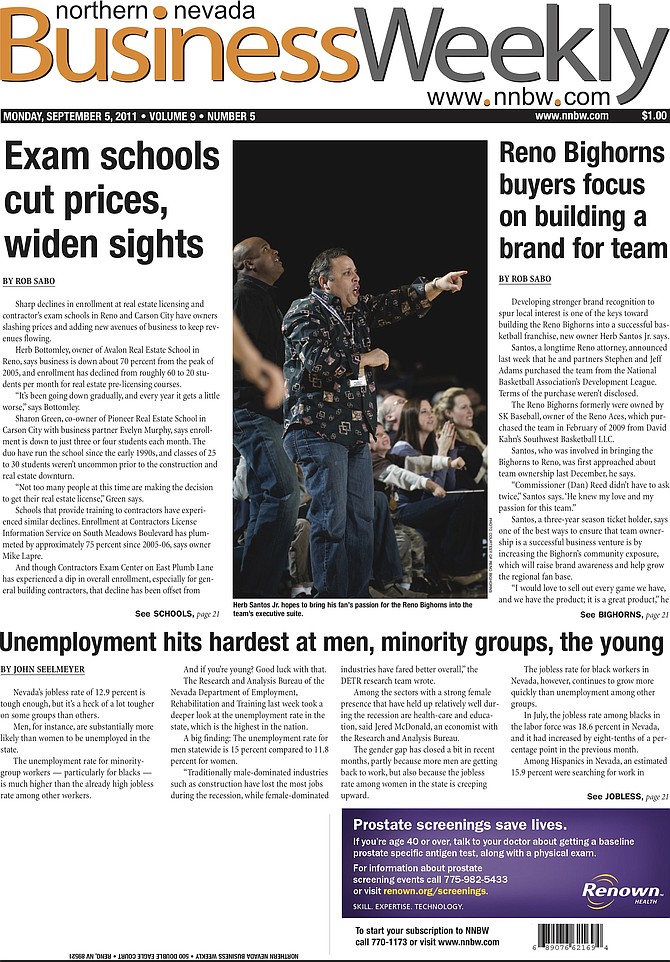 Reno Bighorns buyers focus on building a brand for team

Developing stronger brand recognition to spur local interest is one of the keys toward building the Reno Bighorns into a successful basketball franchise, new owner Herb Santos Jr. says.

Santos, a longtime Reno attorney, announced last week he and partners Stephen and Jeff Adams purchased the team from the NBA’s Development League. Terms of the purchase weren’t disclosed.

The Reno Bighorns formerly were owned by SK Baseball, owner of the Reno Aces, which purchased the team in February 2009 from David Kahn’s Southwest Basketball LLC. Santos, who was involved in bringing the Bighorns to Reno, was first approached about team ownership last December, he says.

“Commissioner (Dan) Reed didn’t have to ask twice,” Santos says. “He knew my love and my passion for this team.”

Herb Bottomley, owner of Avalon Real Estate School in Reno, says business is down about 70 percent from the peak of 2005, and enrollment has declined from roughly 60 to 20 students per month for real estate pre-licensing courses.

“It’s been going down gradually, and every year it gets a little worse,” says Bottomley.

Sharon Green, co-owner of Pioneer Real Estate School in Carson City, says enrollment is down to just three or four students each month: “Not too many people at this time are making the decision to get their real estate license.”

Nevada’s jobless rate of 12.9% is tough enough, but it’s a heck of a lot tougher on some groups than others. Men, for instance, are substantially more likely than women to be unemployed in the state.

The unemployment rate for minority group workers — particularly for blacks — is much higher than the already high jobless rate among other workers. And if you’re young? Good luck with that.

The Nevada Department of Employment, Rehabilitation and Training last week took a deeper look at the unemployment rate in the state, which is the highest in the nation. A big finding: The rate for men statewide is 15% compared to 11.8% for women.

Among the sectors with a strong female presence that have held up relatively well during the recession are healthcare and education.